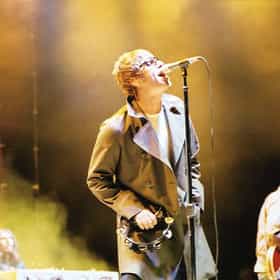 Oasis were an English rock band formed in Manchester in 1991. Developed from an earlier group, the Rain, the band originally consisted of Liam Gallagher (lead vocals, tambourine), Paul "Bonehead" Arthurs (guitar), Paul "Guigsy" McGuigan (bass guitar) and Tony McCarroll (drums). Upon returning to Manchester, Liam's older brother, Noel Gallagher (lead guitar, vocals) joined as a fifth member, which formed the band's core and settled line-up. During the course of their existence, they had various line-up changes, though the Gallagher brothers remained as the staple members until the group's demise. Oasis signed to independent record label Creation Records in 1993 and ... more on Wikipedia

The Best Oasis Songs of All Time 16.4k votes List of the best Oasis songs, ranked by fans like you. Throughout their career Oasis has produced classic after classic, fro...
How The Gallagher Brothers' Intense Mutual Hatred Destroyed Oasis And Turned Them Into Punchlines 35.2k views There's sibling rivalry, and then there's the Liam and Noel Gallagher feud. One of these things is just not quite like the o...
The Best Oasis Albums of All Time 1.4k votes Oasis is considered one of the best Britpop bands, one of the best alternative rock bands, and one of the biggest '90s bands...
The Best Oasis Music Videos 316 votes Oasis official music videos as found on MTV, VH1 and YouTube. All Oasis music videos are listed from most popular to least. ...

Oasis is ranked on...

#195 of 285 Musicians Who Belong in the Rock and Roll Hall of Fame 423k VOTES Update: the Rock and Roll Hall of Fame has listened to your feedback and inducted a number of artists on this list sinc...
#126 of 2,187 The Greatest Musical Artists of All Time 13.4M VOTES When VH1 polled fellow artists to name the greatest artists of all time, it seemed like a good idea---but in reality, the li...
#78 of 2,217 People who voted for Oasis... People under 30 are 2x more likely to vote for this People outside of the US are 2x more likely to vote for this The Best Rock Bands of All Time 3.3M VOTES There are thousands of rock bands that have existed throughout the decades ever since the dawn of rock and roll, but only th...
#232 of 350 The Greatest Classic Rock Bands 485.1k VOTES The greatest classic rock bands of all time embody the spirit of a generation of people who just wanted to rock. These top c...
#13 of 411 People who voted for Oasis... also upvote Harry Potter Franchise on The Most Rewatchable Movies The Greatest Musical Artists of the '90s 1M VOTES   Take a big whiff- "mmmbop", it smells like the '90s in here! An incredibly eclectic decade for music, the...
#138 of 570 The Most Hipster Bands 178.3k VOTES Since the mid-2000s, the word hipster has invaded the lexicon of pop culture and has become a term, for better or worse, syn...
#86 of 358 The Worst Rock Bands of All Time 746.8k VOTES Here they are: the absolute worst rock bands in history, ranked from the most awful bands to the kind of okay but still pret...
#4 of 10 Inside The Biggest And Nastiest Rap Vs. Rock Beefs Ever 10.8k VOTES Beefs in music go back practically as far as the first note ever played. Even classical composers took a few digs at fellow ...
#531 of 1,075 The Worst Bands & Musicians of All Time 1.3M VOTES The worst bands in music history, ranked by music fans (and haters.) This list contains the most awful bands to listen to fr...
#309 of 571 Things That Are Not As Cool As People Think They Are 1.1M VOTES Jorts are the dumbest things I've ever seen. Next to Toms shoes. Next to the Toyota Prius. Next to d-bags taking pictures of...
#87 of 98 '90s Greats Making the Best Music Today 34.1k VOTES A list of 90s greats making the best music today. While many of their contemporaries have either fallen to the wayside or sp...
#3 of 101 The Best Musical Groups Featuring Brothers, Ranked 1.9k VOTES Here are the greatest bands and groups featuring brothers. The family that plays together stays together. A lot of bands hav...
#6 of 12 Pettiest Reasons Bands Broke Up 1.8k VOTES Some of the greatest bands in music history called it quits at the height of their fame - sometimes because the band legitim...
#91 of 100 Artists Who Have Inspired the Best Covers 16.2k VOTES Artists who have inspired the best covers include legendary musicians and bands like The Beatles, Bob Dylan and Jimi Hendrix...
#6 of 41 The Best Bands for Drowning Out Noise Around You 1.7k VOTES Your coworkers are great. So are the strangers at your local coffee shop. But sometimes you just want some peace and quiet. ...
#29 of 596 The Best Indie Bands & Artists 152.2k VOTES Before the genre became mainstream (which in itself is paradoxical) indie bands meant that a particular group was signed to ...
#1 of 71 The Best Britpop Bands 18k VOTES At the beginning of the 1990s, Britpop started to dominate the airwaves not only in the UK, but globally as well. At the tim...
#43 of 165 The Best Musicians Who Performed on SNL In The '90s 862 VOTES The 1990s were a period of transition and change for Saturday Night Live, but they carried through and started the new mille...
Every Band & Musician Who Has Performed on Saturday Night Live 106.8k VIEWS Live from the main stage at 30 Rockefeller Plaza, this is a list of every band, musician, and singer who has performed on Sa...
Fave Bands to Ski To 4.6k VIEWS I have a very carefully chosen skiing playlist w 100s of diverse tracks. But this year I didn't get to update it quite enoug...

Oasis is also found on...