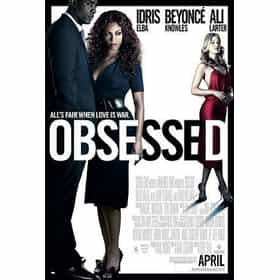 Obsessed is a 2009 American thriller film directed by Steve Shill. The Rainforest Films production stars Idris Elba, Beyoncé, and Ali Larter. Obsessed tells the story of Lisa, a mentally-disturbed office temp played by Larter, who develops romantic feelings for her boss, Derek Charles, and continuously attempts to seduce him. The more he rejects her, the more she pursue him. Derek's wife, Sharon, learns of Lisa's obsessive behavior, and suspects an affair. Screen Gems president Clint Culpepper conceived the basic idea of Obsessed, which was then developed by writer David Loughery, allocated a production budget of $20 million, and filmed in the summer of 2008. Obsessed was ... more on Wikipedia

Obsessed is ranked on...

Obsessed is also found on...