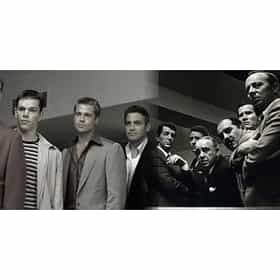 Ocean's Eleven is a 2001 American comedy heist film and the remake of the 1960 Rat Pack film of the same name. The 2001 film was directed by Steven Soderbergh and features an ensemble cast including George Clooney, Brad Pitt, Matt Damon, Don Cheadle, Andy García, and Julia Roberts. The film was a success at the box office and with critics. Soderbergh directed two sequels, Ocean's Twelve in 2004 and Ocean's Thirteen in 2007, resulting in the term the Ocean's Trilogy. It was the fifth highest-grossing film of 2001. ... more on Wikipedia

The Best 'Ocean's Eleven' Quotes 22 votes The best Ocean’s Eleven quotes make you realize how great the movie really is, even if you haven't seen it in a while. Let's...

Ocean's Eleven is ranked on...

Ocean's Eleven is also found on...