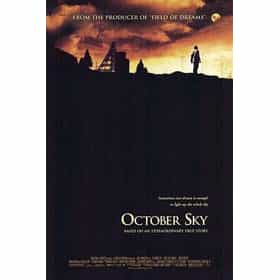 October Sky is a 1999 American biographical film directed by Joe Johnston, starring Jake Gyllenhaal, Chris Cooper and Laura Dern. It is based on the true story of Homer Hickam, a coal miner's son who was inspired by the launch of Sputnik 1 in 1957 to take up rocketry against his father's wishes, and who eventually became a NASA engineer. Most of the film was shot in rural East Tennessee, including Oliver Springs, Harriman and Kingston in Morgan and Roane counties. The movie mostly received a positive critical reception and is still celebrated in the regions of its setting and filming. ... more on Wikipedia

October Sky is ranked on...

October Sky is also found on...