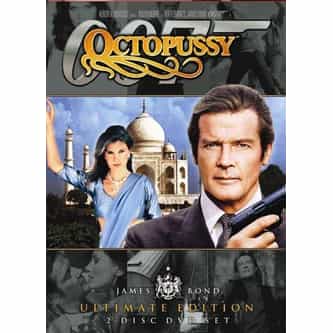 Tagline
James Bond's all time high.
Nobody does him better
Nobody does it better...thirteen times.

Sequel
A View to a Kill

Prequel
For Your Eyes Only

Octopussy is the thirteenth entry in the Eon Productions James Bond film series, and the sixth to star Roger Moore as the fictional MI6 agent James Bond. The film's title is taken from a short story in Ian Fleming's 1966 short story collection Octopussy and The Living Daylights, although the film's plot is original. It does, however, include a portion inspired by the Fleming short story "The Property of a Lady", while the events of the short story "Octopussy" form a ... more on Wikipedia

Octopussy IS LISTED ON