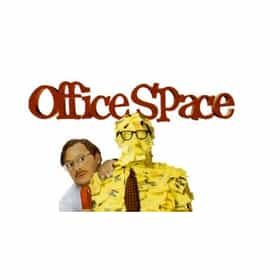 Office Space is a 1999 American comedy film written and directed by Mike Judge. The film satirizes the everyday work life of a typical mid-to-late-1990s software company, it focuses on a handful of individuals fed up with their jobs and stars Ron Livingston, Jennifer Aniston, Gary Cole, Steven Root, David Herman, Ajay Naidu, and Diedrich Bader. The film's sympathetic depiction of ordinary IT workers garnered a cult following within that field, but also addresses themes familiar to white collar employees and the workforce in general. Shot in Las Colinas and Austin, Texas, Office Space is based on Judge's Milton cartoon series. It was his first foray into live action film and second ... more on Wikipedia

The Best 'Office Space' Quotes 961 votes The best Office Space quotes make you realize how funny the movie really is, even if you haven't seen it in a while. Let's r...

Office Space is ranked on...

Office Space is also found on...