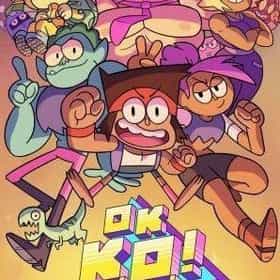 OK K.O.! Let's Be Heroes is an American superhero comedy animated series created by Ian Jones-Quartey. It is set in the futuristic year of 201X, where the world is populated by video game and manga-esque characters. The series follows the titular character, K.O., and his efforts to become the world's greatest hero, while working at Gar's Bodega (run by the no-nonsense Mr. Gar), a hero supply shop in the Lakewood Plaza strip mall. ... more on Wikipedia

#523 of 728 The Best Cartoons of All Time 2.9M VOTES There have been many fantastic animated TV shows throughout the history, but which ones are the best? Some people think that...
#358 of 380 The Best Kids Cartoons of All Time 1.2M VOTES This list contains information about the best kids cartoons, ranked by your votes. Over the years, there have been tons of g...
#15 of 20 The Best Current Shows About Aliens 682 VOTES Extraterrestrials continue to captivate the public and the best current alien shows on television range in terms of ton...
#120 of 122 The Best Cartoon Network TV Shows 482.6k VOTES Cartoon Network is one of the all-time best TV channels for action-packed cartoons that both kids and adults can enjoy. This...
#10 of 95 The Best New Animated TV Shows of the Last Few Years 89.1k VOTES With so many great TV series currently airing, we’re ranking the best animated TV shows since 2015. Our list of the highest ...
#22 of 61 The Best Animated Series In 2019 14.9k VOTES UPDATED: Check out the Best New Animated Series of 2020! It's 2019 and we're well beyond "cartoons aren't just f...
#28 of 48 The Best Current Animated Series 42.9k VOTES The slate of current animated series on TV and streaming services is nothing short of spectacular. And here are those shows,...
#6 of 16 The Best Current Cartoon Network Shows 7.7k VOTES Some of the best Cartoon Network shows on now in 2019 illustrate the ways in which animation - and children's programming in...
#47 of 52 The Best Animated Sci-Fi & Fantasy Series Ever Made 2.6k VOTES Animated television shows have a unique ability to create truly fantastical and out of this world fantasy and science fictio...