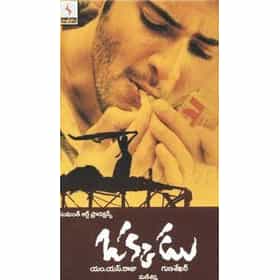 Okkadu is a 2003 Telugu melodrama film directed by Gunasekhar. It stars Mahesh Babu, Bhoomika Chawla, and Prakash Raj. Music was composed by Mani Sharma and editing was helmed by A. Sreekar Prasad. M.S. Raju produced this film. The film has garnered eight Nandi Awards and four Filmfare Awards South. The movie was instant Chartbuster and became BlockBuster. This movie was later remade into Tamil as Ghilli and became a blockbuster. It was also remade in Bengali as Jor. It was also remade in Kannada as Ajay, starring Puneet Rajkumar. It was also remade in Hindi by Boney Kapoor as Tevar starring Arjun Kapoor and Sonakshi Sinha. In Oriya, it has been re-adapted as Mate Anidela Lakhe ... more on Wikipedia

Okkadu is also found on...