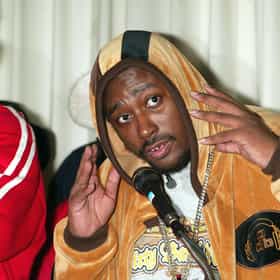 Russell Tyrone Jones (November 15, 1968 – November 13, 2004), better known by his stage name Ol' Dirty Bastard (often abbreviated as O.D.B.), was an American rapper and producer. He was one of the founding members of the Wu-Tang Clan, a rap group primarily from New York City, New York, which first rose to mainstream prominence with their 1993 debut album Enter the Wu-Tang (36 Chambers).His professional success was hampered by frequent legal troubles, including incarceration. He died on November 13, 2004, of a drug overdose, two days before his 36th birthday.Ol' Dirty Bastard was noted for his "outrageously profane, free-associative rhymes delivered in a distinctive half-rapped, ... more on Wikipedia

Ol' Dirty Bastard is ranked on...

#106 of 139 Bygone Musicians You Most Want to See Perform as Holograms 75.2k VOTES A hologram wish-list for dead musicians. At the Coachella Music Festival in April of 2012, a holographic image of the deceas...
#36 of 139 The Dopest Rappers of the '90s 240.4k VOTES The best '90s rappers and rap groups brought us some of the best rap songs of all time with artists like Tupac Shakur, Dr. D...
#23 of 114 Rappers with the Best Voices, Ranked 34.8k VOTES When ranking the best rap artists, the rapper's voice is an important factor in determining which hip hop artists stand...
#50 of 152 The Greatest Musicians Who Died Before 40 63.3k VOTES   Some of the best musicians in history only lived for a few short decades. This list ranks those musicians whose live...
#5 of 26 Silliest Celebrity Name Changes 7.4k VOTES The silliest celebrity name changes put each of these celebrities names into the headlines, but not necessarily for making w...
#42 of 192 The Most Respected Rappers, Ranked 40.5k VOTES When it comes to the rap game, it's all about respect. In other words, a rapper's career will only go so far if they aren't ...
#73 of 207 The Best Rap Lyricists of All Time 376k VOTES A list of the best rap lyricists of all time. Since hip hop and rap music became popular at the beginning of the 1980s, many...
#5 of 10 Every Member of Wu-Tang Clan, Ranked Best to Worst 5.5k VOTES Wu-Tang Clan is one of the most storied hip-hop groups of all time. But who among its legendary members should reign supre...
#36 of 76 Hip Hop Stars You Most Wish You Could Sound Like 25.4k VOTES If you could roll up to a party and magically have the skills and voice of any MC, rapper, or hip hop artist, who would...
#33 of 88 The Greatest Gangsta Rappers of All Time 108.6k VOTES If you were a fan of West Coast rap at the end of the 1980s and early 1990s, the odds are pretty high that you're familiar w...
The Real Names of 150 Rappers 520.6k VIEWS This list of the real names of rappers will inform and enlighten you, because who even knew some of the best rappers in hist...
Famous People Who Survived Near-Fatal Gunshot Wounds 15.7k VIEWS All too often, celebrities become the focus of violent attacks. There are a number of famous people who survived being sho...
17 Celebrities Charged with Indecent Exposure 104.4k VIEWS From rock stars dropping trou at concerts to future movie stars flashing their butts to traffic, plenty of famous people hav...
Karinne Steffans' Loves & Hookups 59k VIEWS Who is Karinne Steffans dating? Who Karinne Steffans dated; list of Karinne Steffans loves, ex boyfriends; breakup rumors. K...
Rappers Who Have Braids 19.5k VIEWS Rappers sport a variety of hairstyles and many rappers have braids or have had them at some point. Rappers with braids come ...