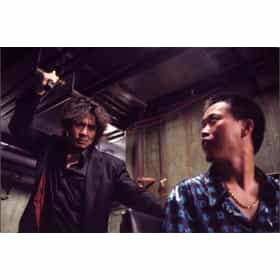 Oldboy is a 2003 South Korean mystery thriller neo-noir film directed by Park Chan-wook. It is based on the Japanese manga of the same name written by Nobuaki Minegishi and Garon Tsuchiya. Oldboy is the second installment of The Vengeance Trilogy, preceded by Sympathy for Mr. Vengeance and followed by Sympathy for Lady Vengeance. The film follows the story of Oh Dae-su, who is locked in a hotel room for 15 years without knowing his captor's motives. When he is finally released, Dae-su finds himself still trapped in a web of conspiracy. ... more on Wikipedia

Oldboy is ranked on...

#76 of 157 The Best Movies You Never Want to Watch Again 156.2k VOTES A list of the most disturbing movies that, for whatever reason, you never, ever want to watch again. This list is full of gr...
#497 of 6,106 People who voted for Oldboy... People Age 30 to 49 are 2x more likely to vote for this The Best Movies Of All Time 5.6M VOTES These are the best movies of all time, ranked by movie experts and film fans alike. What are the greatest movies in cinema h...
#47 of 51 The Most Rewatchable Action Movies 29k VOTES Is there such a thing as comfort movies when it comes to action films? This is a list of action movies we keep watching, eve...
#63 of 140 The Most Awkward Movies to Watch with Your Parents 51.4k VOTES There are certain obvious types of movies you don't want to watch with your parents. There are times, however, when a seemin...
#294 of 582 The Greatest Film Scores of All Time 229.3k VOTES This list contains greatest movie themes and scores ever recorded, chosen by the Ranker community. (NOTE: This list is for f...
#85 of 137 The Goriest Movies Ever Made 271.3k VOTES Are you a fan of gory movies? If so, you’ve come to the perfect place to find a new favorite gory movie. Go ahead and browse...
#8 of 13 Twist Endings That Are Better Than The Twist Endings They Ripped Off 1.3k VOTES There are only so many ways to end a movie. Movie endings that genuinely throw the audience for a loop are difficu...
#11 of 149 The Best Movies of 2003 10.4k VOTES A list of the best movies of 2003, from dramas like Mystic River to critically acclaimed films like American Splendor. The '...
#1 of 15 The All-Time Goriest Scenes From Non-Horror Movies 905 VOTES When you go to the theater to see a prestige film the last thing you’re expecting to see is someone get their head smashed i...
#17 of 70 The Best Mindf*ck Movies 10.5k VOTES Movies that mess with your mind, plots that reveal radically different realities; things are seldom what they seem in these ...
#10 of 14 14 Movies Only A True Action Fan Would Pick For Movie Night 1.1k VOTES Any regular action fan can recommend Mad Max: Fury Road or The Dark Knight for a surefire movie night full of...
#5 of 102 The Best Korean Movies Of All Time 730 VOTES Looking for good Korean movies to watch? Here are the all-time greatest Korean films, ranked by fans everywhere. After Bong ...
#23 of 94 The Best Movies That Are Super Weird 6k VOTES List of the best weird movies. This list compiles the greatest films of all time that also happen to be the strangest. Wheth...
#31 of 178 The Best Mystery Movies 15.4k VOTES A list of all the best mystery movies ever made, many of which are streaming on Netflix and Amazon Prime. This mystery movie...
#1 of 48 The Best Foreign Thriller Movies, Ranked 1.4k VOTES If you love a good adrenaline rush, check out some of these superb foreign thriller movies to get your heart rate pumpi...
#47 of 57 The Best Cerebral Crime Movies, Ranked 1.2k VOTES This list contains information on the best cerebral crime movies, ranked from best to worst by user votes. The best cerebral...
#15 of 96 The Very Best Shows & Movies About Revenge 572 VOTES They say revenge is a dish best served cold, but that's not the only saying about revenge. Another is that if you plan on se...
#2 of 28 The Most Terrifying Asian Horror Movies On Shudder 40 VOTES Over the past twenty years, Asian horror films have taken over the genre. This list of Asian horror movies on Shudder puts m...
#3 of 31 The Best Psychological Thriller Movies On Shudder 82 VOTES Are you into movies where fear, anxiety, delusion, and skewed perception infect its characters, sometimes even the film...
#15 of 25 The Top 25 Must-See Quintessential Psychological Thrillers 549 VOTES A lot of films can scare an audience. From slasher films to horror films filled with jump scares, it isn't that hard to...
#1 of 202 The Best R-Rated World Cinema Movies 1.9k VOTES List of R-Rated world movies, ranked from best to worst with movie trailers when available. This list takes the best R-Rated...
#33 of 200 The Best R-Rated Martial Arts Movies 1.5k VOTES List of R-Rated martial arts movies, ranked from best to worst with movie trailers when available. This list takes the best ...
#6 of 50 The Best Action Movies of 2003 596 VOTES List of the best 2003 action movies, ranked by how many upvotes they've received by other fans of the genre. These movies gi...
The Best Ever Movie Fight Scenes 12k VIEWS These are the best fight scenes. Ever. Beat these, I challenge you. These are fightin' words.

Oldboy is also found on...