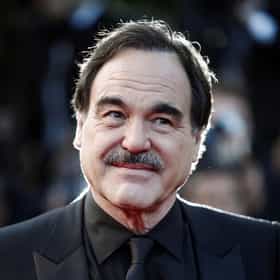 William Oliver Stone (born September 15, 1946) is an American filmmaker, director, writer and conspiracy theorist.Stone won an Academy Award for Best Adapted Screenplay as writer of Midnight Express (1978). He also wrote the acclaimed gangster movie Scarface (1983). Stone achieved prominence as writer and director of the war drama Platoon (1986), which won Academy Awards for Best Director and Best Picture. Platoon was the first in a trilogy of films based on the Vietnam War, in which Stone served as an infantry soldier. He continued the series with Born on the Fourth of July (1989)—for which Stone won his second Best Director Oscar—and Heaven & Earth (1993). Stone's other notable ... more on Wikipedia

Oliver Stone is ranked on...

#235 of 266 Celebrities Who Should Run for President 621.4k VOTES Which celebrity would you actually vote for if they ran for President of the United States? If you can remember all the way ...
#83 of 101 The Most Beloved US Veterans 54.3k VOTES While all of our veterans should be beloved and respected, many have stuck in the public consciousness. Some became famous v...
#37 of 161 The Most Overrated Directors of All Time 39.3k VOTES List of the most overacted directors in the film industry of all times. Often the success, both critically and financially, ...
#12 of 46 The Greatest Directors of the 1980s 2.5k VOTES List of the top directors of the 80s. From 1980 to 1989, film history was shaped by esteemed directors who defined the decad...
#62 of 64 The Most Iconoclastic Directors in Film History 1.6k VOTES What does it mean to be iconoclastic? In its rawest sense, it means to break the rules. To be an iconoclastic artist, one wo...
People Describe What It's Like To Work With Tommy Lee Jones 5.1k VIEWS After five decades working in film and television, Tommy Lee Jones has developed quite the reputation. From action to d...
17 Directors Who Are Notoriously Difficult to Work With 106.3k VIEWS Want to be a glamorous Hollywood movie star? Well, you might think twice when you hear what working for some of these direct...
The Locations of All Hollywood Walk of Fame Stars 419.8k VIEWS A list of stars on the Hollywood Walk of Fame, with photos. This list includes all television and movie stars. Acquiring a s...
Celebrities Who Were In The Military 7.7M VIEWS The many celebrities who were in the military signed up to make the ultimate sacrifice for their countries. Through the year...
Celebrities With Gap Teeth 621.9k VIEWS This is a list of famous people with gap teeth. These gap-toothed celebs have at least one thing in common: they love to smi...
Celebs with Political Stances That You Hate 124.6k VIEWS The realm of entertainment gossip may seem like a safe haven from current events, but celebrity politics seem to pop up ther...
#14 of 28 The Most Influential Documentarians of All Time 390 VOTES Much like the films themselves, the influential documentarians on this list have changed people's viewpoints ...
Famous People Whose Last Name Is Stone 16.5k VIEWS Being a fairly common name, it's no surprise there are a lot of famous people with the last name Stone. Do you recognize all...
60+ Celebrities Who Smoke Weed 70.5M VIEWS List of celebrities who smoke weed, loosely ranked by fame and popularity. More and more celebrities are speaking of their d...
Appalling Anti-Semitic Remarks by Famous People 197.1k VIEWS Despite the fact that people of all races and religions run the entertainment industry, several famous actors, actresses, mu...
40 Famous People Raised in Interfaith Families 3.6k VIEWS Not only do these celebrities raised in interfaith families get to celebrate the 7 days of Kwanzaa, 8 nights of Hanukkah, AN...

Oliver Stone is also found on...