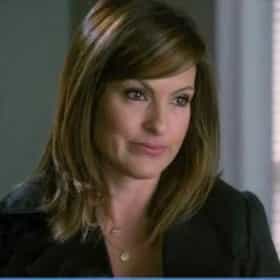 Olivia Benson is a fictional character on the NBC police procedural drama Law & Order: Special Victims Unit, portrayed by Mariska Hargitay. Benson is a detective with the Manhattan SVU at the 16th Precinct of the New York City Police Department. During the first twelve seasons of the series Benson is partnered with Detective Elliot Stabler. After Stabler resigns from the NYPD, Nick Amaro becomes her partner, and Benson becomes the unit's senior detective. Following John Munch's retirement, Benson takes and passes the Sergeant's exam, and shortly thereafter assumes command of the unit after its captain, Donald Cragen, also retires. ... more on Wikipedia

Olivia Benson is ranked on...

#16 of 93 People who voted for Olivia Benson... People in the Northeast are 2x more likely to vote for this The Most Hardcore Current TV Characters 289.8k VOTES The most badass current TV characters include men and women who, though they do not exist in reality, are fearless in today'...
#8 of 93 The Best Female Characters on TV Right Now 151k VOTES Some of the greatest characters in this new golden age of TV are female right now, and their characters span centuries, cult...
#7 of 1,087 People who voted for Olivia Benson... Women are 2x more likely to vote for this also upvote Buffy Summers on The Greatest TV Characters of All Time The Greatest Female TV Characters of All Time 1.1M VOTES Who are the greatest female TV characters of all time? This list includes some of the greatest television characters in...
#85 of 1,608 The Greatest TV Characters of All Time 1.2M VOTES List of TV's most memorable characters, of all time, chosen by the Ranker community. What makes a character live on in the p...
#2 of 27 The Best Policemen and Detectives on TV Right Now 5.6k VOTES The detectives currently on TV in 2016-2017 range from hilarious to tragic to downright frightening. Some of the best acto...
#6 of 105 The Greatest Fictional Cops & Law Enforcement Officers of All Time, Ranked 11k VOTES Criminals should beware of these great fictional cops, as they almost always get the perp in the end. From movies, TV shows,...
#1 of 142 The Greatest Female TV Role Models 46.4k VOTES List of the greatest female TV role models. Here are the rankings for the best female characters for your daughter to look u...
#18 of 64 Current TV Characters You Would Want to Be BFFs With 15.4k VOTES Friendship has its privileges. If we’re lucky enough, we all have that one special friend who we can rely on to get us both ...
#1 of 56 Current TV Characters You Would Hire 5.3k VOTES The current TV characters you'd hire are all ranked here on this list of employable fictional people. Ever watch a televis...
#17 of 49 Which Current TV Character Would Be the Best Choice for President? 3.9k VOTES If only we could elect a fictional character as president. As business tycoons and professional politician types attempt to ...
#7 of 29 The Coolest Fictional Characters from New York 1.8k VOTES There are some pretty cool dudes and ladies in New York City. This list ranks all the coolest fictional characters from New ...
#4 of 27 All The Detectives From 'Law & Order,' Ranked 37.5k VOTES In Law & Order’s 25 year run on network television, it has introduced viewers to a slew of detectives - some good, some ...
#4 of 47 The Greatest Perpetually Single Women in TV History 8.8k VOTES List of the best female characters who are perpetually single in television history, as ranked by television critics and fan...
#18 of 21 The Sassiest Characters In TV History 614 VOTES What does it mean to be sassy? For starters, you need to be uninhibited, bold, and extremely lively. These sassy TV cha...
#1 of 24 Fictional Characters Named Olivia 528 VOTES List of notable fictional characters whose name is Olivia, including photos when available. The fictional characters named O...
#29 of 33 The Best Conspiracy Characters In Movies & TV 523 VOTES When it comes to conspiracy theories, it’s the characters that make these movies and shows so great. No matter how many...
Beliefnet's Top 10 Most Empowering Women on TV Today 5.1k VIEWS Beliefnet says: "These characters have overcome or be struggling with hardships that make them better women; and they e...

Olivia Benson is also found on...