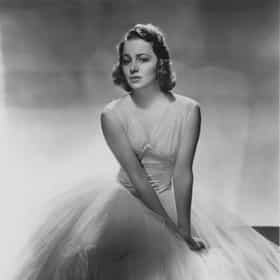 Dame Olivia Mary de Havilland (; born July 1, 1916) is a British-American-French retired actress whose film career spanned from 1935 to 1988. She appeared in 49 feature films, was one of the leading actors of her time, and is among the last surviving movie stars of the "Golden Age" of Classical Hollywood. Her younger sister was actress Joan Fontaine. De Havilland first came to prominence as a screen couple with Errol Flynn in adventure films such as Captain Blood (1935) and The Adventures of Robin Hood (1938). One of her best-known roles is Melanie Hamilton in the film classic Gone with the Wind (1939), for which she received her first of five Academy Award nominations, this ... more on Wikipedia

Olivia de Havilland is ranked on...