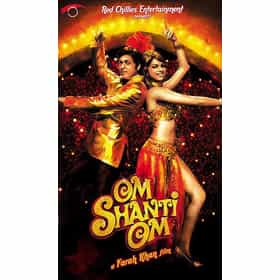 Om Shanti Om is a 2007 Indian romantic-thriller film directed and choreographed by Farah Khan. It stars Shah Rukh Khan and debutant Deepika Padukone in the lead roles while Arjun Rampal, Shreyas Talpade, and Kirron Kher feature in supporting roles. More than forty-two well-known Hindi Movie stars appear in the course of the film, including thirty of them in one song alone. The film is set in the 1970s and 2000s; it pays tribute to, and pokes fun at, the Indian film industry of both these eras. The film was released in 2,000 prints worldwide making it the largest Indian cinematic release at the time. Om Shanti Om was released on 9 November 2007 to mostly positive reviews from critics ... more on Wikipedia

Om Shanti Om is ranked on...

Romance Movies and Films List of All Movies Released in 2007