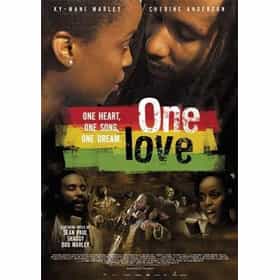 One Love is a 2003 Jamaican film starring Ky-Mani Marley and Cherine Anderson. It was written by Trevor D. Rhone and directed by Rick Elgood and Don Letts. The film is set in Jamaica and is a romance with reggae. A young Rasta musician falls in love with the gospel-singing daughter of a Pentecostal preacher, meeting her as they both sign up for a music contest.A contest which the winner gets twenty thousand US dollars and a record deal.When they start falling in love her father forbids her from seeing him because he wants her to marry a church member.They face overcoming the preacher's disapproval as well as battling a corrupt record producer. ... more on Wikipedia

One Love is ranked on...

One Love is also found on...