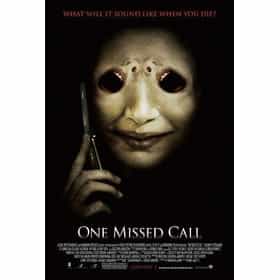 One Missed Call is a 2008 American supernatural horror film and remake of Takashi Miike's 2003 Japanese film One Missed Call, which itself was based on the Yasushi Akimoto novel Chakushin Ari. The film was released in North America on January 4, 2008 and was directed by Eric Valette and written by Andrew Klavan. The film, starring Shannyn Sossamon, was produced and distributed by Warner Bros. Pictures. Despite being a moderate box office success, the film was panned by film critics often regarding it as the weakest J-horror remake to be released. ... more on Wikipedia

One Missed Call is ranked on...

One Missed Call is also found on...