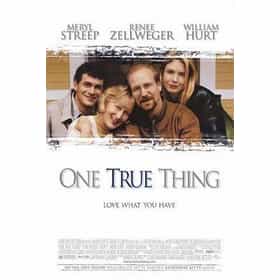 One True Thing is a 1998 American drama film directed by Carl Franklin. It tells the story of a woman who is forced to put her life on hold in order to care for her mother who is dying of cancer. It was adapted by Karen Croner from the novel by Anna Quindlen. The movie stars Meryl Streep, Renée Zellweger, William Hurt and Tom Everett Scott. Bette Midler sings the lead song, "My One True Friend", over the end credits. The track was first released on Midler's 1998 album Bathhouse Betty. It was shot in Morristown, NJ, Maplewood, NJ, as well as in Princeton University. ... more on Wikipedia

One True Thing is ranked on...

#102 of 142 The Best Movies of 1998 14.5k VOTES A list of the best movies of 1998, from blockbusters like Armageddon to cult classics like The Big Lebowski. The '90s were a...
#79 of 84 Great Movies That Take Place in Autumn 5.8k VOTES Colorful leaves and cool breezes make fall many people's favorite time of year. Maybe that's why it's such a popular setting...
#22 of 32 The Best Movies About Thanksgiving, Ranked 7.2k VOTES The best Thanksgiving movies offer a welcome respite for anyone looking to escape the craziness that is the holiday. If you ...
#26 of 42 The Best Movies About Cancer 1.5k VOTES This list features the best movies about the topic of cancer. Many of the films take an in-depth approach to the life of a p...
#53 of 63 The Best R-Rated Melodrama Movies 432 VOTES List of R-Rated melodramatic movies, ranked from best to worst with movie trailers when available. This list takes the best ...
#18 of 39 The Best Renée Zellweger Movies 252 VOTES The best Renée Zellweger movies are the ones that give her a chance to really show off her acting capabilities. She d...
#10 of 23 The Best Lauren Graham Movies 314 VOTES List of the best Lauren Graham movies, ranked best to worst with movie trailers when available. Lauren Graham's highest gros...

One True Thing is also found on...