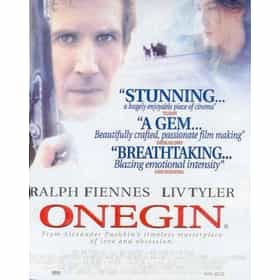 Onegin is a 1999 British-American romantic drama film based on Alexander Pushkin's novel in verse Eugene Onegin, co-produced by British and American companies and shot mostly in the United Kingdom. Onegin is Martha Fiennes' directorial debut and stars her brother Ralph Fiennes in the role of Yevgeni Onegin, Liv Tyler as Tatiana, Irene Worth as Princess Alina and Toby Stephens as Lensky. Two other Fiennes siblings were involved in the project: Magnus Fiennes wrote the music and Sophie Fiennes appeared in a minor role. ... more on Wikipedia

Onegin is ranked on...

Onegin is also found on...

Romance Movies and Films List of All Movies Released in 1999