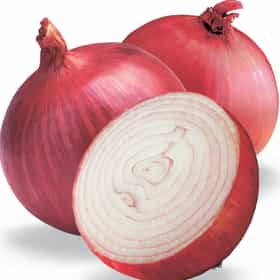 The onion, also known as the bulb onion or common onion, is used as a vegetable and is the most widely cultivated species of the genus Allium. This genus also contains several other species variously referred to as onions and cultivated for food, such as the Japanese bunching onion, the Egyptian onion, and the Canada onion. The name "wild onion" is applied to a number of Allium species but A. cepa is exclusively known from cultivation and its ancestral wild original form is not known, although escapes from cultivation have become established in some regions. The onion is most frequently a biennial or a perennial plant, but is usually treated as an annual and harvested in its ... more on Wikipedia

Onion is ranked on...

#19 of 84 The Healthiest Superfoods 15.6k VOTES The healthiest superfoods are those foods that have exceptional nutritional benefits. See how they help with this list of me...
#18 of 106 People who voted for Onion... also upvote Star Wars Franchise on The Best Movies of All Time also upvote Star Wars Franchise on The Greatest Sci-Fi Movies of All Time The Best Things to Put in a Salad 352.6k VOTES The very best salad ingredients, be them veggies, cheese, meats or other items, are the essential components that when combi...
#24 of 52 The Vegetables Nobody Wants to Eat 160.4k VOTES Broccoli, cauliflower, Brussels sprouts. The world’s plates are littered with the gross vegetables we refuse to eat. Everyon...
#4 of 58 The Best Burger Toppings 70.4k VOTES What are the best burger toppings? Everyone, it seems, has certain favorite hamburger toppings (and opinions on the best bur...
#4 of 36 Tasty Root Vegetables 6.6k VOTES A list of root vegetables and tubers. These are edible plants in which the leaves, stems, flowers, or roots are edible. This...
#3 of 45 The Worst Foods to Eat on a Date 29.3k VOTES Going on a first date is a tricky situation. After you've decided what to wear, what to say, and where to go, you have to fi...
#10 of 39 The Best Salad Toppings (That Are Still Healthy) 1.6k VOTES The recipe for a classic garden salad starts with a bed of leafy greens. From there, though, the edible possibilities a...
#24 of 47 The Best Antioxidant Foods 969 VOTES List of the best antioxidant foods. Antioxidants are nature’s protection against the body’s free radicals, which are known t...
Tasty Stem & Bulb Vegetables 101.2k VIEWS Do you like asparagus and garlic? How about leeks? What is a leek, even? Well, it's one of the delicious veggies on this lis...
#18 of 29 The Best Food Pairings For Zinfandel, Ranked 253 VOTES Wondering what foods to eat with Zinfandel? Here is a list of the best food and wine pairings for Zinfandel, which includes ...

Onion is also found on...