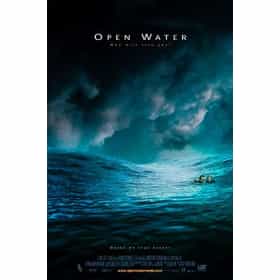 Open Water is a 2003 drama psychological horror film loosely based on the true story of an American couple, Tom and Eileen Lonergan, who in 1998 went out with a scuba diving group, Outer Edge Dive Company, on the Great Barrier Reef, and were accidentally left behind because the dive-boat crew failed to take an accurate headcount. The film was financed by writer/director Chris Kentis and his wife, producer Laura Lau, both avid scuba divers. The film cost $130,000 to make and was bought by Lions Gate Entertainment for $2.5 million after its screening at the Sundance Film Festival. Lions Gate spent a further $8 million on distribution and marketing. The film ultimately grossed $55 million ... more on Wikipedia

Open Water is ranked on...

#38 of 157 The Best Movies You Never Want to Watch Again 157.3k VOTES A list of the most disturbing movies that, for whatever reason, you never, ever want to watch again. This list is full of gr...
#1 of 14 Pretty Good Horror Movies That Will Make You Afraid To Go In The Water 1k VOTES Lakes. Rivers. Ponds. Oceans. Shallows. Seas. No matter the body of water, our cultural obsession with what lies beneath has...
#45 of 53 The Best Movies "Loosely" Based on True Stories 6.9k VOTES "Based on a true story" isn't always exactly accurate. This list of movies loosely based on true stories took a fe...
#12 of 21 The Greatest Lost at Sea Movies Ever Made 4.2k VOTES This list is water-tight and full of wonderful lost at sea movies, ranked from best to worst by user votes. The best lost at...
#5 of 27 The Scariest Ship Horror Movies Set on the Sea 2.2k VOTES There's nothing scarier than a horror movie set at sea. The top horror movies set on ships feature deadly threats from real-...
#1 of 15 Movies You Shouldn’t Watch If You Have Thalassophobia 2.9k VOTES Thalassophobia, like many other phobias, is a response to a particular stimulus. Unlike aquaphobia, a general fear of w...
#21 of 45 The 35+ Best Drama Movies About Survival 1.8k VOTES Whether facing the apocalypse, zombies, or a vast open ocean, characters in the best survival drama movies all share an undy...
#20 of 24 The Best Survival Movies Based on True Stories 1.5k VOTES There are hundreds if not thousands of movies about survival, but only a choice few are based on true events. The survival m...
#28 of 165 The Very Best Survival Movies 20.9k VOTES A list of the best survival movies. All of the best survival films have been included, but if you feel we somehow missed one...
#3 of 100 The Best Movies With Water in the Title 737 VOTES Have you ever noticed how many movies there are with water in the name? This list ranks the best movies with water in the ti...
#15 of 78 The Best Natural Horror Films 2k VOTES A list of the best natural horror movies ever made, ranked by film fans' votes. This list is ordered by popularity, so only ...
#30 of 174 The Best Lions Gate Entertainment Movies List 2.9k VOTES List of Lions Gate Entertainment movies, ranked best to worst, including trailers, genres, and release dates. Lions Gate Ent...

Open Water is also found on...