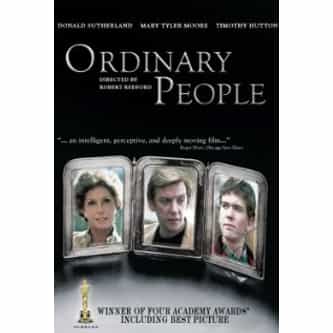 Tagline
some films you watch
others you feel.
Everything is in it's proper place-except the past!

Ordinary People is a 1980 American drama film that marked the directorial debut of actor Robert Redford. It stars Donald Sutherland, Mary Tyler Moore, Judd Hirsch and Timothy Hutton. The story concerns the disintegration of an upper-middle class family in Lake Forest, Illinois, following a boating incident. The screenplay by Alvin Sargent was based upon the 1976 novel Ordinary People by Judith Guest. The film was a critical and commercial success, winning four Oscars, including the Academy ... more on Wikipedia

Ordinary People IS LISTED ON