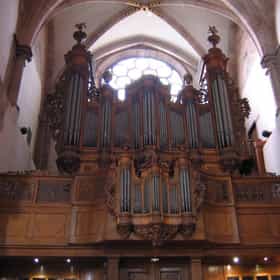 In music, the organ is a keyboard instrument of one or more divisions, each played with its own keyboard, played either with the hands or with the feet. The organ is a relatively old musical instrument, dating from the time of Ctesibius of Alexandria, who is credited with inventing the water organ. It was played throughout the Greek and Roman world, particularly during races and games. During the early medieval period it spread from the Byzantine Empire, where it continued to be used in secular and imperial court music, to Western Europe, where it gradually assumed a prominent place in the liturgy of the Catholic Church. Subsequently it re-emerged as a secular and recital instrument. ... more on Wikipedia

Organ is ranked on...

Organ is also found on...

Keyboard instrument - Instruments in This Family