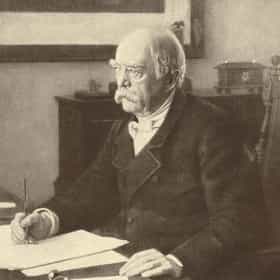 Otto Eduard Leopold, Prince of Bismarck, Duke of Lauenburg (Born von Bismarck-Schönhausen; German: Otto Eduard Leopold Fürst von Bismarck, Herzog zu Lauenburg; 1 April 1815 – 30 July 1898), known as Otto von Bismarck (German: [ˈʔɔto fɔn ˈbɪsmaɐ̯k] (listen)), was a conservative Prussian statesman who dominated German and European affairs from the 1860s until 1890 and was the first Chancellor of the German Empire between 1871 and 1890. In 1862, King Wilhelm I appointed him as Minister President of Prussia, a position he would hold until 1890, with the exception of a short break in 1873. He provoked three short, decisive wars against Denmark, Austria, and France. Following the ... more on Wikipedia

Otto von Bismarck is ranked on...