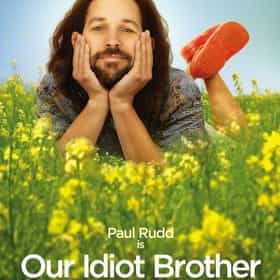 Our Idiot Brother is a 2011 American comedy-drama film directed by Jesse Peretz and starring Paul Rudd, Elizabeth Banks, Zooey Deschanel, and Emily Mortimer. The script was written by Evgenia Peretz and David Schisgall based on Jesse and Evgenia Peretz's story, and tells the story of an idealistic man who intrudes and wreaks havoc in his three sisters' lives. The film was co-produced by Anthony Bregman, Peter Saraf, and Marc Turtletaub. It premiered at the 2011 Sundance Film Festival and was given wide release on August 26, 2011. It received mostly positive reviews, with critics praising the story and Rudd's performance, but criticizing the uneven script. ... more on Wikipedia

lists about Our Idiot Brother

Our Idiot Brother is ranked on...

Our Idiot Brother is also found on...