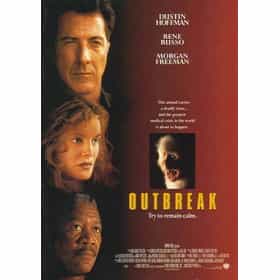 Outbreak is a 1995 American medical disaster film directed by Wolfgang Petersen and based on Richard Preston's non-fiction book The Hot Zone. The film stars Dustin Hoffman, Rene Russo, and Morgan Freeman and co-stars Cuba Gooding Jr., Kevin Spacey, Donald Sutherland, and Patrick Dempsey. The film focuses on an outbreak of a fictional virus called Motaba in Zaire and later in a small town in the United States. Its primary settings are government disease control centers USAMRIID and the CDC, and the fictional town of Cedar Creek, California. Outbreak's plot speculates how far military and civilian agencies might go to contain the spread of a contagion. ... more on Wikipedia

The Bubonic Plague Ravaged San Francisco In The 1900s—And The Government Tried A Massive Cover Up 32.2k views The San Francisco bubonic plague outbreak was one of the biggest health crises — and controversies — of the 20th-century Uni...

Outbreak is ranked on...

Outbreak is also found on...