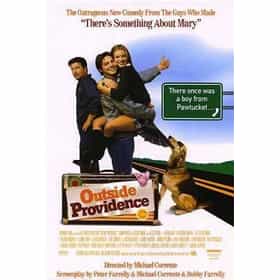 Outside Providence is a 1999 American film adaptation of Peter Farrelly's 1988 novel of the same name. The film was directed by Michael Corrente, and it was written by Corrente and the brothers Peter and Bobby Farrelly. Centring on Timothy "Dildo/Dunph" Dunphy, the film is about his life of mischief, his "incentive" to attend the Cornwall Academy preparatory boarding school, and his realization that the haze in which he has lived has to give way to something that will stay with him forever. The book is based on Peter Farrelly's experience at Kent School, a prep school in Kent, Connecticut. ... more on Wikipedia

Outside Providence is ranked on...

#340 of 493 The Funniest '90s Movies 299.4k VOTES List of the funniest 90s movies. The best comedies of the 1990s make up the titles on this ranking page. Nineties nostalgia ...
#20 of 20 What to Watch If You Love Dazed and Confused 578 VOTES So you loved Dazed and Confused? Alright, alright, alright. Now you need another fix in the form of a movie or TV show like ...
#26 of 52 The Best Movies Released Labor Day Weekend 1.9k VOTES This list includes the best movies released over Labor Day weekend. Overall, the choices are kind of slim compared to some o...
#25 of 33 The Best R-Rated Stoner Movies 1.6k VOTES List of R-Rated stoner movies, ranked from best to worst with movie trailers when available. This list takes the best R-Rate...
#10 of 34 The Best Movies That Take Place In Rhode Island 192 VOTES Which of these movies about Rhode Island are the best? It's time to vote up the best movies set in the Ocean State. Some of ...
#19 of 43 The Best Amy Smart Movies 559 VOTES List of the best Amy Smart movies, ranked best to worst with movie trailers when available. Amy Smart's highest grossing mov...

Outside Providence is also found on...