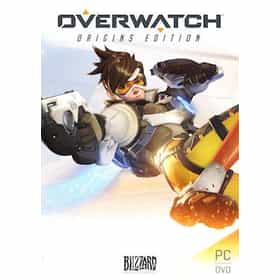 Overwatch is a team-based multiplayer online first-person shooter video game developed and published by Blizzard Entertainment. It was released in May 2016 for Windows, PlayStation 4, and Xbox One. Overwatch assigns players into two teams of six, with each player selecting from a roster of over 20 characters, known in-game as "heroes", each with a unique style of play, whose roles are divided into four general categories: Offense, Defense, Tank, and Support. Players on a team work together to secure and defend control points on a map or escort a payload across the map in a limited amount of time. Players gain cosmetic rewards that do not affect gameplay, such as character ... more on Wikipedia

The Legend of Dragoon

Mass Effect 2
15 Interesting Overwatch Fan Theories That Are Actually Plausible 6.6k votes Some theories about Overwatch characters seem to be taking on a life of their own. For many players of the popular Blizzard ...
The Most Devastating Ultimate Moves In 'Overwatch' 6.5k votes Overwatch has only been out since 2016, but in a few short years, we've already seen the addition of tons of new heroes, map...
Overwatch Characters Drawn As Pokemon 10.6k votes If you're a fan of both Overwatch and Pokémon, then this list is for you. Although the two games are extremely popula...
The Best Professional Overwatch Players, Ranked 5.9k votes Listen up, heroes! It's time for you to rank the best Overwatch players in the world. As one of the best video games out, Ov...
The Best Overwatch Streamers On Twitch 1.2k votes Looking for a good Overwatch streamer? We're ranking the best Overwatch streamers on Twitch right now. Released in 2016, the...
Every Hero In Overwatch, Ranked 9.3k votes Overwatch is the award-winning, action-packed, team-based first-person shooter from Blizzard Entertainment, the creators of ...
The Best Overwatch YouTubers 4.3k votes The world could always use more of the best Overwatch YouTube channels. From strategy guides to funny gameplay highlights, t...
17 Annoying Overwatch Players You Have Probably Cussed At 2k votes Overwatch exploded onto the multiplayer scene in 2016 and has already amassed more than 25 million players across PC and con...
25 Brilliant Gender Bend Overwatch Cosplays 4.1k votes Get ready for some Overwatch cosplays to make you do a double-take! Some of these resemble crossplays, where a person embodi...
32 Gorgeous Fan Art Interpretations Of Overwatch Heroes 3.8k votes Overwatch is one of the most popular games on the planet. With a selectable cast of 23 characters, and a rich backstory that...
22 Staggeringly Adorable Chibi Overwatch Characters 746 votes With powerful heroes galore, Overwatch is an all-out online first person shooter where two teams face off to complete or imp...
Overwatch Heroines You'd Want to Have a Romantic Dinner With 2k votes If you've been paying attention to the internet's reaction to Overwatch, you may have noticed a common response to the chara...
Spot-On Overwatch Cosplays 118.2k votes The world could always use more beautiful heroes, and these attractive cosplays of Overwatch characters ensures we are never...
20 Overwatch Background Stories You Probably Missed 7.3k views While the plot of most shooter games doesn't evolve much beyond "grab gun, shoot", Overwatch has a surprisingly ri...
Perfect and Inexpensive Gifts for Overwatch Fans 1.1k votes With millions of active gamers capturing control points and pushing payloads every day, it's no surprise that there are many...
All The Overwatch Characters, Ranked By How Annoying They Are 9.3k votes The characters of Blizzard's Overwatch are some of the most interesting ones you'll find in a MOBA FPS. They have unique des...
Celebrities Who Play Overwatch 6.1k views With its unique cast of characters and fascinating setting in the not-too-distant-future, Overwatch quickly became one of th...
Every Overwatch Victory Pose, Ranked 2k votes Rock stars, athletes, an international task force of superhuman heroes: what do they all have in common? The victory pose, a...
22 Hilarious Overwatch Fails, Accidents And Absurd Plays Of The Game 352 votes Playing Overwatch is pretty serious business. Just spend 10 minutes in Team Chat during a competitive ranked game and you'll...
The Best Collectible Skins In Overwatch 1.4k votes When Blizzard Entertainment released Overwatch back in May of 2016, it was already stocked with a plethora of gorgeous skin ...

Overwatch is ranked on...