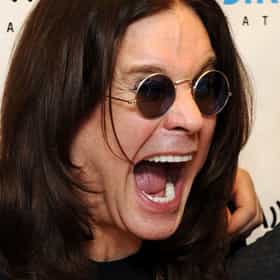 John Michael "Ozzy" Osbourne (born 3 December 1948) is an English singer, songwriter, actor and reality television star who rose to prominence during the 1970s as the lead vocalist of the heavy metal band Black Sabbath, during which he adopted the nickname "The Prince of Darkness". Osbourne was fired from the band in 1979 due to alcohol and drug problems, but went on to have a successful solo career, releasing eleven studio albums, the first seven of which were all awarded multi-platinum certifications in the United States. Osbourne has since reunited with Black Sabbath on several occasions. He rejoined the band in 1997 and helped record the group’s final studio ... more on Wikipedia

Guns N' Roses
Surprising Revelations About Ozzy And Sharon Osbourne's Relationship 14.6k views The love affair between Ozzy and Sharon Osbourne has been a matter of public interest even before the premiere of their real...
Inside Ozzy Osbourne's Rough-And-Tumble Youth 25.6k views Growing up in post-WWII England was tough for many artists who came of age in the 1960s. The global conflict left an impact ...
The Most Underrated Black Sabbath Songs Of All Time 1.1k votes Arguably the most influential heavy metal band of all time and pioneers of the genre, Black Sabbath had their fair share of ...
The Best Ozzy Osbourne Albums of All Time 2.7k votes Ozzy Osbourne is considered by many to be one of the greatest front men in rock and is a member of the best metal bands of a...
15 Utterly Insane, True Facts About Ozzy Osbourne 325.9k views Ozzy Osbourne, the prince of darkness, has somehow managed to survive a lifetime of being one of the most outlandish people ...
Ozzy Osbourne Tattoos 1.3k votes Ozzy Osbourne tattoos, ranked by fans of the sexy star and of body art. Heavy metal icon Ozzy Osbourne was the lead vocalist...

Ozzy Osbourne is ranked on...

Ozzy Osbourne is also found on...