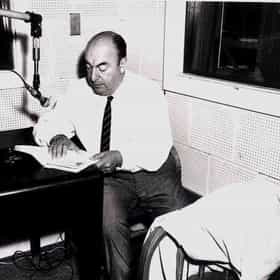 Ricardo Eliécer Neftalí Reyes Basoalto (12 July 1904 – 23 September 1973), better known by his pen name and, later, legal name Pablo Neruda (; Spanish: [ˈpaβlo neˈɾuða]), was a Nobel Prize winning Chilean poet-diplomat and politician. Neruda became known as a poet when he was 13 years old, and wrote in a variety of styles, including surrealist poems, historical epics, overtly political manifestos, a prose autobiography, and passionate love poems such as the ones in his collection Twenty Love Poems and a Song of Despair (1924). He won the Nobel Prize for Literature in 1971. Neruda occupied many diplomatic positions in various countries during his lifetime and served a ... more on Wikipedia

Pablo Neruda is ranked on...

#220 of 1,176 The Best Writers of All Time 312.5k VOTES The pen is truly mightier than the sword, and if you’re a book enthusiast you know that to be true. Some of history’s most i...
#21 of 373 The Greatest Poets of All Time 753.4k VOTES Who are the best poets of all time? It includes poets such as Maya Angelou, Langston Hughes, William Shakespeare, and Sylv...
Celebrities You Didn't Know Use Stage Names 1.9M VIEWS List of celebrities with stage names, loosely ranked according to fame and popularity. It's tough to break into show busin...
Famous People Named Pablo 6.6k VIEWS Ever wondered how many famous people named Pablo there are? This list of celebrities named Pablo includes photos and infor...
Famous Authors Who Used Pen Names 47.8k VIEWS Think you really know your favorite author? It may be surprising to you to learn that a number of famous authors are actuall...
Every Person Who Has Been Immortalized in a Google Doodle 57.8k VIEWS Who are the most influential people in history? Here's a good place to start. This is a list of every person who has ev...

Pablo Neruda is also found on...