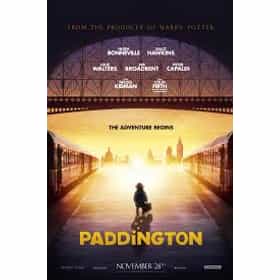 Paddington is a 2014 British-French comedy film, directed by Paul King, written by King and Hamish McColl, and produced by David Heyman. Based on Paddington Bear by Michael Bond, the film stars Ben Whishaw as the voice of the title character, along with Hugh Bonneville, Sally Hawkins, Julie Walters, and Nicole Kidman in live-action roles. It was released in the United Kingdom on 28 November 2014 and received mostly positive reviews from film critics. ... more on Wikipedia

Paddington is ranked on...

#87 of 162 The Best Movies of 2014 65.9k VOTES Sure there are the Oscars, Golden Globes, and a number of other award ceremonies that hand out trophies to movies that are v...
#924 of 1,203 The Absolute Funniest Movies Of All Time 1M VOTES The funniest movies of all time, ranked by fans. What are the funniest movies ever made? From Airplane! to The Jerk to The 4...
#61 of 173 The Best Movies for Families 21.5k VOTES The films on this list of the best movies for families have been ranked by the community as the greatest family films. It ca...
#55 of 80 The Best Live Action Animal Movies for Kids 16k VOTES What are the best animal movies for kids? This list of great live animal movies for children includes some of the most class...
#11 of 33 The Best Foreign Films of 2014 538 VOTES Not all the biggest movies of 2014 were made in the U.S. Movies are a global experience and as such thousands of movies are ...
#9 of 27 The Best Family Films of 2014 2.8k VOTES When it comes time to round up the kids and head to the movie theater, there are certainly a lot of options to choose from. ...
#97 of 123 The Best Comedy Movies Of The 2010s Decade 9.3k VOTES If you're in the mood for a good laugh, you're in luck because we want you to vote for the best comedy movies of the 2010s. ...
#310 of 462 The Best Feel-Good Movies 431.9k VOTES Want to feel warm and fuzzy inside? This is a ranked list of the best feel-good movies that make us experience all the good ...
#28 of 69 The Best Nicole Kidman Movies 8.9k VOTES List of the best Nicole Kidman movies, ranked best to worst with movie trailers when available. Several films in Nicole Kidm...
#13 of 37 Good Movies for 4 Year Olds 6.7k VOTES This list has awesome and entertaining movies for 4 year olds, ranked from best to worst by user votes. The best movies...
#18 of 27 The Best Comedy Movies Set in London 136 VOTES The British are known for their sense of humor, so it's no surprise that there are many comedy movies based in London on thi...
#7 of 59 The Best Fantasy Movies for 11 Year Old Kids 680 VOTES Perhaps no genre in film offers its spectators the opportunity to escape like a fantasy movie. There are so many magical mov...
All the Movies I Watched in 2015 2k VIEWS Well, look at that. I watched 250 movies in 2015! Here is a list of all the movies I watched, in order, including the date t...

Paddington is also found on...