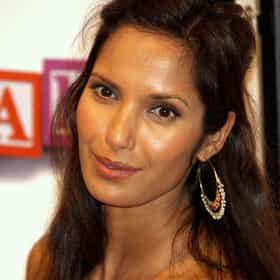 Padma Parvati Lakshmi Vaidynathan (born September 1, 1970), known professionally as Padma Lakshmi (Tamil: பத்மா லட்சுமி, pronounced [ˈpəd̪maː ˈləkʃmiː]), is an American author, actress, model, television host, and executive producer. She is the host of the US cooking competition program Top Chef. She has hosted the show continuously since season 2 (2006), with season 16 (2018) being the latest. For her work, she received a Primetime Emmy nomination for Outstanding Reality Host in 2009. She has published three cookbooks and one memoir. She has also ventured into acting in film and television, and hosted several cooking programs before Top Chef. She also launched her own kitchenware ... more on Wikipedia

Padma Lakshmi is ranked on...

#259 of 3,307 People who voted for Padma Lakshmi... People in the Northeast are 2x more likely to vote for this The Most Beautiful Women of All Time 132.1M VOTES Here are the most beautiful women of all time ranked not on looks alone, regardless of their talent. Thi...
#731 of 1,026 The Most Beautiful Women In Hollywood 4.4M VOTES The most beautiful women in the world are a great mix of attractive TV actresses, singers, models, and more, ...
#605 of 1,582 The Most Beautiful Women in the World 5.6M VOTES Naming the most beautiful women in the world is a difficult task because of how subjective it is. Beauty is a mixture of phy...
#28 of 142 The Best Hot Ones Guests Ever 20.7k VOTES Hot Ones is the show with hot questions and even hotter wings. Hot Ones has taken YouTube by storm, pitting various A-list c...
#514 of 3,140 The Most Beautiful Celebrities Of Our Time 6.2M VOTES This list of hot celebrities is ranked by pop culture junkies worldwide, making it the best place to find the most attractiv...
#115 of 421 The Hottest Women Over 40 in 2013 602k VOTES This is an Ultimate List of the hottest women over 40. It's hard to believe that some of these well known women are over 40,...
#19 of 30 The Worst Cooking Competition Show Judges 3.3k VOTES Without a judge, it's basically impossible to have a reality TV cooking competition. But sometimes it feels like a bad judge...
#264 of 327 Who Should Be in the 2013 Maxim Hot 100? 134.7k VOTES Maxim Magazine is accepting votes for their 2013 Hot 100 list, but before that's published the Ranker Community is going to ...
#6 of 15 Surprisingly Political Celebrities In 2018 510 VOTES The year 2018 has fostered an incredibly divisive and intense political climate in America. Most political and social issues...
#142 of 241 The Most Stunning Indian Models 121.4k VOTES Here is a list of the most beautiful models from India, as voted on by the Ranker community. These Indian models have been f...
20 Celebrities Involved in Custody Battles 129.3k VIEWS Divorce, separation, and break-ups can be messy, but they're all usually much messier when children are involved. Several fa...
The Greatest Celebrity Halloween Costumes Of All Time 1.5M VIEWS Halloween is the perfect holiday for an actor. Not only are you encouraged to wear a costume, but it’s usually required. For...
The Most Famous Single Moms in Hollywood 181.9k VIEWS List of the most famous single moms in Hollywood. These celebrity single mothers are raising children on their own and makin...
30+ Famous People of Indian Descent 109.5k VIEWS This list of famous people of Indian descent is loosely ranked by fame and popularity. Many famous celebrities are of Indian...
Celebrity Knicks Fans 221.4k VIEWS This list of celebrity Knicks fans is loosely ranked by fame and popularity. The New York Knicks basketball team has a lot o...
#6 of 19 The Best Episodes of Bon Appétit's Back-To-Back Chef 37 VOTES Bon Appétit's Back to Back Chef is a brilliant way to waste time on YouTube. In each episode a professional...
Celebrity Moms 2010: Famous Mothers Who Gave Birth in 2010 15.6k VIEWS Full list of celebrity mothers from 2010. Celebrity moms who gave birth in 2010 are listed below with pictures. Famous moms ...

Padma Lakshmi is also found on...