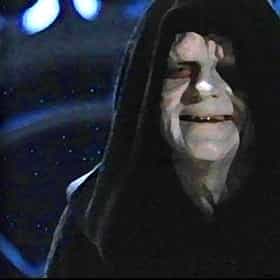 Sheev Palpatine is a fictional character and the main antagonist of the Star Wars franchise, primarily portrayed by Ian McDiarmid. In the original trilogy, he is depicted as the aged, pale-faced Emperor of the Galactic Empire. In the prequel trilogy, he is portrayed as a charismatic Senator from Naboo that—through the use of deception and political manipulation—rises to the position of Supreme Chancellor of the Galactic Republic. Though outwardly appearing to be a well-intentioned public servant and supporter of democracy prior to becoming Emperor, he is in fact Darth Sidious, the Dark Lord of the Sith—a cult of practitioners of the dark side of the Force previously thought to have ... more on Wikipedia

Palpatine is ranked on...

#118 of 3,827 The Best Movie Characters of All Time 1M VOTES List of the best movie characters of all time, ranked by film buffs and people like you. This list includes performances by ...
#14 of 961 People who voted for Palpatine... also upvote Star Wars Franchise on The Best Movies of All Time also upvote Star Wars Franchise on The Greatest Sci-Fi Movies of All Time The Greatest Movie Villains of All Time 1.2M VOTES While some of us tend to despise movie villains, plenty of movie-goers favor some of these antagonists. Whether that's ...
#113 of 343 The Best TV Villains Of All Time 169.4k VOTES The best TV villains of all time rank among some of the greatest TV characters of all time as well as some of the creepiest ...
#51 of 86 The Best Fictional Teachers 14.6k VOTES There are a bunch of movies that feature teachers prominently. In most movies, teachers are a nameless bunch who often times...
#6 of 17 Which Jedi Or Sith Would Win In An All-Out Battle? 14.5k VOTES In a galaxy with lightsabers and clone armies, it's easy to underestimate the power of the Force. It has flowed through the ...
#5 of 50 The Fictional Leaders You'd Most Like to Behead 11.5k VOTES A list of fictional leaders who you’d most like to behead. Do you know of some fictional kings, queens, princes, or politici...
#16 of 62 The Greatest Fictional Characters Leading Double Lives 16.6k VOTES Are you looking for a new book or movie where the fictional character is leading a double life? Browse through this list o...
#44 of 53 53 Behind The Scenes Photos Of Movie Villains 176.6k VOTES Some of the greatest movie villains can give you nightmares if you spend too much time thinking about their faces. But ...
#8 of 15 How Old Are Star Wars Characters, Really? 5.8k VOTES The events of the Star Wars saga may have happened a long time ago in a galaxy far, far away, but it sti...
#51 of 56 The Greatest Naifs in Film History 3.5k VOTES In many a film across Hollywood cinema history, there are plenty of characters that kind of make you squint and go, "ar...
#45 of 45 Resting Bitch Face: Who Does It Best? 17.5k VOTES Resting Bitch Face, or RBF, is a condition (or skill!) that delivers a very specific message. "I dare you to not disapp...
#12 of 19 The Ugliest Movie Villains in Film History 10.9k VOTES Heroes are great and all, but our favorite part of a film is usually the villain. They get the best lines, they have awesome...
#16 of 25 Cartoon Politicians on TV You'd Actually Vote For 35.2k VOTES With the political climate at an all-time high, sometimes it's best to escape the real world by kicking back and watching so...
#12 of 43 The Greatest Wizard Characters of All Time 6.7k VOTES For this poll we've created a list of the greatest wizards of all time, featuring wizards you know from movies, television, ...

Palpatine is also found on...