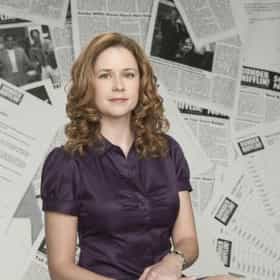 Pamela Morgan "Pam" Halpert née Beesly is a fictional character on the U.S. television sitcom The Office, played by Jenna Fischer. Her counterpart in the original UK series of The Office is Dawn Tinsley. Her character is initially the receptionist at the paper distribution company Dunder Mifflin, before becoming a saleswoman and eventually office administrator until her termination in the series finale. Her character is shy, growing assertive but amiable, and artistically inclined, and shares romantic interest with Jim Halpert, whom she begins dating in the fourth season and marries and starts a family with as the series continues. Pam's kindness and compassion means ... more on Wikipedia

Jim Cheated On Pam On 'The Office' And There's Plenty Of Evidence To Prove It 261.6k votes For nine seasons, The Office delivered comic stories about life at a failing paper company. There were pranks, Dundies, and ...
14 Reasons Why Jim Halpert and Pam Beesly Shouldn't Be Anyone's Relationship Goals 1.4k votes It appears on many a basic dating app bio: "I'm searching for that Jim Halpert and Pam Beesly relationship." It po...

Pam Halpert is ranked on...

#521 of 1,423 The Greatest TV Characters of All Time 1.2M VOTES List of TV's most memorable characters, of all time, chosen by the Ranker community. What makes a character live on in the p...
#6 of 48 People who voted for Pam Halpert... also upvote The Office on The Greatest Sitcoms in Television History The Best The Office (U.S.) Characters 158.5k VOTES This is a list of The Office characters. Please feel free to add any more characters from The Office that you like and to vo...
#19 of 20 The Worst TV And Movie Wedding Dresses 62.1k VOTES There are clearly a lot of gorgeous wedding dresses to swoon over in both movies and TV. That's mainly why when a ...
#115 of 144 The Greatest Female TV Role Models 46.9k VOTES List of the greatest female TV role models. Here are the rankings for the best female characters for your daughter to look u...
#23 of 75 People who voted for Pam Halpert... also upvote Harry Potter Franchise on The Best Movies of All Time also upvote Friday the 13th Franchise on The Greatest Horror Films of All Time The Greatest Geeky Girls on TV 44.9k VOTES List of the greatest female geeky TV characters. The best and nerdiest women on television are ranked on this page based on ...
Which Member Of 'The Office' Are You, According To Your Zodiac Sign? 73.6k VIEWS The Office is pretty much everyone's favorite TV comedy. Fans still clamor for a reboot years after it went off the air...
#11 of 20 The Biggest Underdogs In TV History 192 VOTES Let’s hear it for the underdogs! What makes a good underdog, you ask? It’s not necessarily the odds they have to face, but h...