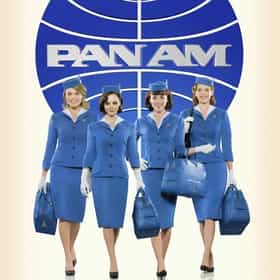 Pan Am is an American period drama television series created by writer Jack Orman. Named for the iconic Pan American World Airways, the series features the pilots and stewardesses of the airline as it operated in the early 1960s at the beginning of the commercial Jet Age. Pan Am premiered on ABC on September 25, 2011 and ended on February 19, 2012. The time slot was subsequently filled by mid-season replacement GCB. Both series were canceled by ABC on May 11, 2012. In May 2012, Sony Pictures Television had conversations with Amazon about picking up the series for a second season because of its international success. It won the "Best Series" at the Rose d'Or TV awards, ... more on Wikipedia

#49 of 206 People who voted for Pan Am... also upvote Star Trek Franchise on The Best Alien Movies Ever Made The Best Single Season Canceled Shows 116.2k VOTES What are the best single season canceled shows in television history? These shows were actually really great, but for whatev...
#18 of 28 What to Watch If You Love Mad Men 246 VOTES If you’ve just finished Mad Men, congratulations. It’s an outstanding show. Now, however, you’re probably wondering what to ...
#25 of 62 The Best ABC Dramas of the 2010s, Ranked 8.7k VOTES These are the best 2010s ABC dramas, ranked by user votes. These ABC dramas left an indelible mark on the television genre. ...
#29 of 34 The Best 2010s Historical Drama Series 8.4k VOTES These are they best 2010s historical drama series, ranked from best to worst by user votes. From some good 2010s historical ...
#125 of 135 The Best ABC Shows of the 2010s 3.2k VOTES The way we watch TV may be changing, but this list of 2010s ABC shows makes it clear that network television still boasts gr...
#21 of 106 The Best Costume Drama TV Shows 707 VOTES The very best costume drama shows on television, ranked from best to worst. This list of the greatest costume drama shows al...