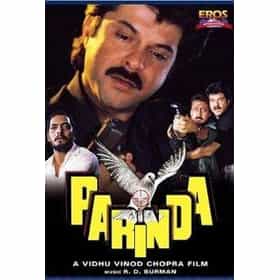 Parinda is a 1989 Indian crime drama film directed and produced by Vidhu Vinod Chopra. It is considered by many to be the turning point in reality in Hindi cinema, as the theme of the film discusses the real life of Indian underworld gangsters and the general life of residents in the city of Mumbai. The film stars Jackie Shroff, Anil Kapoor, Nana Patekar and Madhuri Dixit in the lead roles. It won two National Film Awards and five Filmfare Awards, and was India's official entry for the 1990 Academy Award for Best Foreign Language Film.The movie was titled Kabutarkhana but later changed and release as Parinda.This movie has been remade in Hollywood as Broken Horses. ... more on Wikipedia

Parinda is ranked on...

Parinda is also found on...