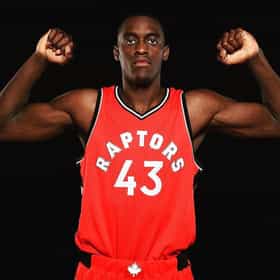 Pascal Siakam (born April 2, 1994) is a Cameroonian professional basketball player for the Toronto Raptors of the National Basketball Association (NBA). He played college basketball for the New Mexico State Aggies and was named the conference player of the year in the Western Athletic Conference (WAC) in 2016. Siakam was selected by Toronto in the first round of the 2016 NBA draft with the 27th overall pick. As a rookie, he received multiple assignments to the NBA Development League (known now as the NBA G League), and helped lead Raptors 905 to a D-League title while earning D-League Finals Most Valuable Player (MVP) honors in 2017. He won an NBA championship with the Raptors in 2019 ... more on Wikipedia

Pascal Siakam is ranked on...