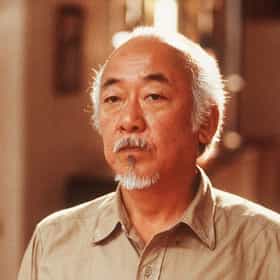 Noriyuki "Pat" Morita (June 28, 1932 – November 24, 2005) was an American actor and comedian known for his roles as Matsuo "Arnold" Takahashi on Happy Days (1975–1983), Mr. Miyagi in The Karate Kid film series and The Toymaster in Babes in Toyland. Morita was nominated for the 1985 Academy Award for Best Supporting Actor for his portrayal of Mr. Miyagi in The Karate Kid. Morita also voiced the Emperor of China in the Disney animated film Mulan (1998) and portrayed Ah Chew in Sanford and Son (1974–1976). Morita was the series lead actor in the television program Mr. T and Tina (1976) and in Ohara (1987–1988), a police-themed drama. The two shows made history for ... more on Wikipedia

Pat Morita is ranked on...

#643 of 1,151 The Best Actors in Film History 2.2M VOTES The best actors ever are ranked here in this list of the best actors in film history. These are the greatest actors ever to ...
#316 of 362 The Funniest People of All Time 868.4k VOTES The funniest people of all time are a mix of actors, comedians, and even a few people who probably didn't start off trying t...
#565 of 2,003 The Greatest Actors & Actresses in Entertainment History 1.7M VOTES The best actors and actresses of all time, male and female, ranked by film fans worldwide. This list of greatest actors and ...
#182 of 333 The Greatest Actors Who Have Never Won an Oscar (for Acting) 452.3k VOTES There are many actors who haven't won an Oscar. For 95 percent of the acting population, there is probably a good reason the...
#39 of 85 The Best Celebrity Cameos In 'SpongeBob SquarePants' 16.2k VOTES SpongeBob SquarePants has been delighting audiences with fresh levels of absurdity since 1999. While the regular cast i...
#39 of 78 The Best Film Actors Who Got Famous on TV First 13.5k VOTES This is a list of famous film actors who got famous on TV first, as ranked by experts and fans alike. There are many route...
#22 of 267 People who voted for Pat Morita... also upvote Star Wars Franchise on The Best Movies of All Time also upvote Rocky Franchise on The Best Movies of All Time The All-Time Greatest Martial Arts Actors 69.4k VOTES This list of the all time greatest martial arts actors (and actresses) is ranked by kung fu fans worldwide. Anyone can vote ...
#1 of 54 The Best Asian American Actors And Actresses In Hollywood 5.3k VOTES While it has seen some controversy over the years, diversity in Hollywood has long been part of its rich history. And while ...
The Locations of All Hollywood Walk of Fame Stars 418k VIEWS A list of stars on the Hollywood Walk of Fame, with photos. This list includes all television and movie stars. Acquiring a s...
Famous Groundlings Members and Alumni 14k VIEWS List of Famous Groundlings Members ranked by fame and popularity. The Groundlings are a famous improv and sketch comedy grou...
Famous People Named Patrick or Pat 38.4k VIEWS List of famous people named Pat & Patrick, along with photos. How many celebrities named Patrick or Pat can you think of...
Famous People Of Japanese Descent 256.7k VIEWS Several well-known movers and shakers are of Japanese ancestry. Some celebs were born overseas, and others are third- and fo...
Male Celebrities Who Are 5’3" 13k VIEWS This list contains examples of male celebs who are 5'3" loosely ranked by fame and popularity. Standing over six inches...
Celebrity Packer Fans 7k VIEWS It's easy to spot a Green Bay Packers fan – just look for the signature cheesehead hat. But look under the foam wedge, and y...

Pat Morita is also found on...