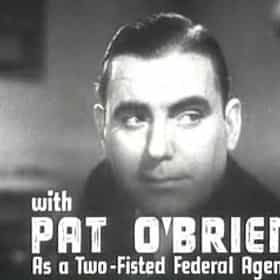 William Joseph Patrick O'Brien (November 11, 1899 – October 15, 1983) was an American film actor with more than 100 screen credits. Of Irish descent, he often played Irish and Irish-American characters and was referred to as "Hollywood's Irishman in Residence" in the press. One of the best-known screen actors of the 1930s and 1940s, he played priests, cops, military figures, pilots, and reporters. He is especially well-remembered for his roles in Knute Rockne, All American (1940), Angels with Dirty Faces (1938), and Some Like It Hot (1959). He was frequently paired onscreen with Hollywood legend James Cagney. O'Brien also appeared on stage and television. ... more on Wikipedia

Pat O'Brien is ranked on...

#832 of 1,149 The Best Actors in Film History 2.2M VOTES The best actors ever are ranked here in this list of the best actors in film history. These are the greatest actors ever to ...
Famous People Whose Last Name Is O'Brien 3.2k VIEWS Being a fairly common name, it's no surprise there are a lot of famous people with the last name O'Brien. Do you recognize a...

Pat O'Brien is also found on...