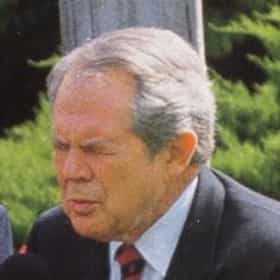 Marion Gordon "Pat" Robertson (born March 22, 1930) is an American media mogul, televangelist, political commentator, former Republican presidential candidate, and former Southern Baptist minister. Robertson advocates a conservative Christian ideology and is known for his past activities in Republican party politics. He is associated with the Charismatic Movement within Protestant evangelicalism. He serves as chancellor and CEO of Regent University and chairman of the Christian Broadcasting Network (CBN). He appears daily on The 700 Club, CBN’s flagship television program. On Robertson's own account, he was not a serious Christian until he underwent personal difficulty. He ... more on Wikipedia

The Top 10 Craziest Things Ever Said By Pat Robertson 140.5k views Recently, a devastating series of earthquakes rocked the small Third World country of Haiti. The country now lies in ruins b...

Pat Robertson is ranked on...

#30 of 1,042 Celebrity Death Pool 2020 42.4k VOTES They may be beloved performers, award winners, or game changers, but no matter how famous, you can’t escape death. This cele...
#67 of 166 The Most Ridiculous Political Pundits 162.6k VOTES This is a bipartisan list of the most over-the-top, spittle-stained, fist-thumping, hyperbolic political pundits of all ti...
#55 of 1,452 Celebrity Death Pool 2018 477.7k VOTES Welcome to Celebrity Death Pool 2018! In increasingly uncertain times, there remains one constant in life - we all die. Cele...
#65 of 160 Celebrity Death Pool 2013 15.4k VOTES Every year we lose more and more famous celebrities. Whether it's from natural causes, suicide, drug abuse or just plain cra...
#71 of 185 Celebrity Death Pool 2014 31.5k VOTES Celebrity death pool 2014: Here's a complete list of celebrities who just might die in 2014. Every year we lose more and mor...
Famous People Named Patrick or Pat 38.4k VIEWS List of famous people named Pat & Patrick, along with photos. How many celebrities named Patrick or Pat can you think of...
Politicians Who Have Blamed Victims During National Tragedies 1.9k VIEWS Victim-blaming may feel like a modern concept, but it’s actually not at all. While the term “victim-blaming” hasn’t been aro...
Famous People Whose Last Name Is Robertson 2.1k VIEWS Being a fairly common name, it's no surprise there are a lot of famous people with the last name Robertson. Do you recognize...

Pat Robertson is also found on...