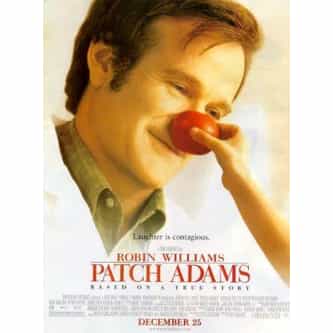 Tagline
Based On A True Story.
Laughter is contagious.

Patch Adams is a 1998 semi-biographical comedy-drama film starring Robin Williams, Monica Potter, Philip Seymour Hoffman and Bob Gunton. Directed by Tom Shadyac, it is based on the life story of Dr. Hunter "Patch" Adams and his book, Gesundheit: Good Health is a Laughing Matter, by Adams and Maureen Mylander. Despite being poorly received by critics and Dr. Adams himself, the film was a box-office success, grossing over twice its budget in the United States alone. ... more on Wikipedia

Patch Adams IS LISTED ON