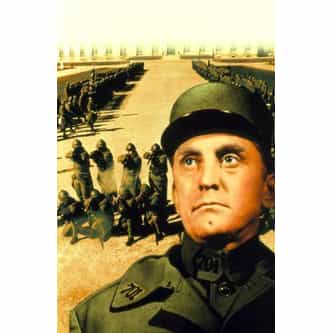 Tagline
It explodes in the no-man's land no picture ever dared cross before!
BOMBSHELL! the roll of the drums... the click of the rifle-bolts... the last cigarette... and then... the shattering impact of this story... perhaps the most explosive motion picture in 25 years!
Now the screen blasts open the bombshell story of a Colonel who led his regiment into hell and back - while their maddened General waited for them - with a firing squad!

Paths of Glory is a 1957 American film by Stanley Kubrick based on the novel of the same name by Humphrey Cobb. Set during WWI, the film stars Kirk Douglas as Colonel Dax, the commanding officer of French soldiers. Dax attempts to defend them against a charge of cowardice in a court-martial. ... more on Wikipedia

lists about Paths of Glory

Paths of Glory IS LISTED ON