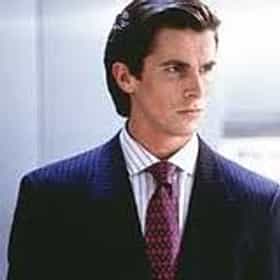 Patrick Bateman is a fictional character, the antihero and narrator of the novel American Psycho by Bret Easton Ellis, and its film adaptation. He is a high-achieving Wall Street investment banker who abuses drugs including cocaine and has a double life where he perceives himself as one of the most vicious serial killers ever to live. From his point of view he commits brutal, repeated, sadistic murders, but he experiences hallucinations and is an unreliable narrator, and so the veracity of his "secret life" is left, to the reader, in doubt. Bateman has also briefly appeared in other Ellis novels. ... more on Wikipedia

Patrick Bateman is ranked on...

#17 of 94 The Most Likable Movie Antiheroes 57.4k VOTES What makes an antihero cool? Well, they’re usually pretty multi-dimensional. They possess villainous qualities, yes, but the...
#44 of 961 People who voted for Patrick Bateman... also upvote Dark Knight Franchise on The Best Superhero Movies Ever Made also upvote Lord of the Rings Franchise on The Best Movies of All Time The Greatest Movie Villains of All Time 1.2M VOTES While some of us tend to despise movie villains, plenty of movie-goers favor some of these antagonists. Whether that's ...
#245 of 3,827 People who voted for Patrick Bateman... People under 30 are 2x more likely to vote for this The Best Movie Characters of All Time 1M VOTES List of the best movie characters of all time, ranked by film buffs and people like you. This list includes performances by ...
#71 of 74 The Most Utterly Terrifying Figures in Horror Films 156.4k VOTES This is a list of the most chillingly terrifying figures in film, as ranked and voted on by horror fans. There are a lot of ...
#4 of 15 The Smartest Villains From Across The Horror Genre 262 VOTES In the hierarchy of intelligence, the victims generally rank lower than the smart horror movie villains they face with ...
#28 of 62 The Greatest Fictional Characters Leading Double Lives 16.7k VOTES Are you looking for a new book or movie where the fictional character is leading a double life? Browse through this list o...
Psychologists Studied Horror Movie Psychopaths And Determined Which Ones Are The Real Deal 76.5k VIEWS People have an unquenchable fascination with psychopaths in our movies. At least from a fictional perspective, they're ...
#17 of 25 The Funniest Characters From Your Favorite Horror Movies 1.8k VOTES We’re ranking the funniest characters in horror history. In the grand scheme of things, there are probably way more funny ho...
#6 of 71 Fictional Characters Named Patrick 833 VOTES List of notable fictional characters whose name is Patrick, including photos when available. The fictional characters named ...
A Chronological Round-Up Of All Christian Bale's Most Dramatic Role Transformations 47k VIEWS Moviegoers know Christian Bale loves getting into character. From Batman to Patrick Bateman, Bale has proven himse...