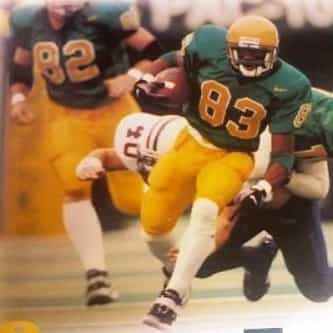 Patrick Jevon Johnson (born August 10, 1976) is a former American football wide receiver. Johnson majored in Journalism and Communications at the University of Oregon from 1994 to 1997, and attended the Craig James Broadcast School in 2000. Mr. Johnson was a two-sport athlete at the University of Oregon, excelling in both football and track, and winning numerous awards and championships during his collegiate athletic career. A two-sport athlete, Johnson was an Olympic-caliber sprinter ... more on Wikipedia

Patrick Johnson IS LISTED ON