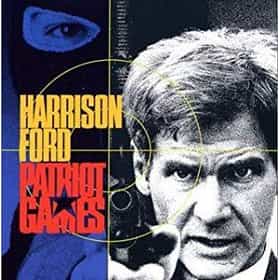 Patriot Games is a 1992 action-suspense film directed by Phillip Noyce and based on Tom Clancy's novel of the same name. It is a sequel to the 1990 film The Hunt for Red October, but with different actors in the leading roles, Harrison Ford starring as Jack Ryan and Anne Archer as his surgeon-wife. James Earl Jones is the lone holdover, reprising his role as Admiral James Greer. The cast also includes Sean Bean, Patrick Bergin, Thora Birch, Samuel L. Jackson and Richard Harris. The film premiered in theaters in the United States on June 5, 1992 and spent two weeks as the #1 film, grossing $178,051,587 in box office business. It presently holds a 76% score on Rotten Tomatoes with 32 ... more on Wikipedia

Patriot Games is ranked on...

Patriot Games is also found on...