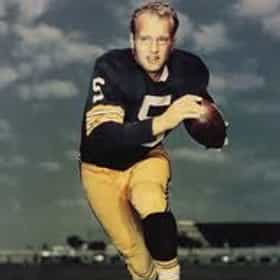 Paul Vernon Hornung (born December 23, 1935), nicknamed The Golden Boy, is a former professional American football player and a Hall of Fame running back for the Green Bay Packers of the National Football League (NFL) from 1957 to 1966. He played on teams that won four NFL titles and the first Super Bowl. He is the first pro football player to win the Heisman Trophy, be selected as the first overall selection in the NFL Draft, win the NFL most valuable player award, and be inducted into both the professional and college football halls of fame.A versatile player, Hornung was a halfback, quarterback, and placekicker. He was an excellent all-around college athlete at Notre Dame, where he ... more on Wikipedia

Paul Hornung is ranked on...

Paul Hornung is also found on...