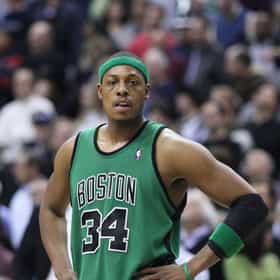 Paul Anthony Pierce (born October 13, 1977) is an American former professional basketball player who played 19 seasons in the National Basketball Association (NBA). He is currently an analyst on ESPN's NBA Countdown. Pierce was a high school McDonald's All-American and earned consensus first-team All-America honors in his junior year at Kansas. After being chosen by the Boston Celtics with the 10th overall pick in the 1998 NBA draft, Pierce spent the first 15 years of his career with Boston. Pierce's nickname, "The Truth", was given to him by Shaquille O'Neal in March 2001. He starred as captain of the Celtics, earning 10 All-Star selections and becoming a four-time All-NBA ... more on Wikipedia

Paul Pierce is ranked on...

Paul Pierce is also found on...