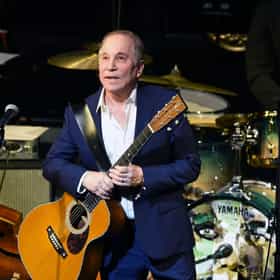 Paul Frederic Simon (born October 13, 1941) is an American singer-songwriter and actor. Simon's musical career has spanned seven decades with his fame and commercial success beginning as half of the duo Simon & Garfunkel (originally known as Tom & Jerry), formed in 1956 with Art Garfunkel. Simon was responsible for writing nearly all of the pair's songs including three that reached number one on the U.S. singles charts: "The Sound of Silence", "Mrs. Robinson", and "Bridge over Troubled Water".The duo split up in 1970 at the height of their popularity, and Simon began a successful solo career, recording three acclaimed albums over the next five ... more on Wikipedia

The Best Paul Simon Solo Songs of All Time 27.3k votes List of the best Paul Simon songs, ranked by soft rock fans like you. Known as one half of the legendary folk-rock duo Simon...
Paul Simon Loves and Hookups 1.3k views Who is Paul Simon dating? Many famous women have dated Paul Simon, and this list will give you more details about these luck...
The Best Paul Simon Albums of All Time 6.2k votes Paul Simon is one of the greatest singer/songwriters ever. Following the disbandment of Simon and Garfunkel, he went on to e...

Paul Simon is ranked on...

Paul Simon is also found on...