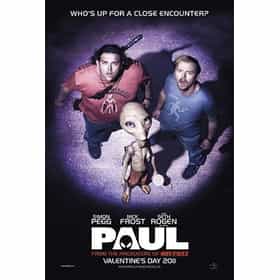 Paul is a 2011 British-American science fiction road comedy film directed by Greg Mottola and written by and starring Simon Pegg and Nick Frost. The film is about two British science fiction fans who meet an extraterrestrial being, voiced by Seth Rogen, with a sarcastic manner and an appetite for alcohol and cigarettes. They help the alien to escape the Secret Service agents who are pursuing him so that he can return to his home planet. The film contains numerous references to other science fiction films, especially those of Steven Spielberg, as well as to general science fiction fandom. Critical reaction to the film was generally positive. ... more on Wikipedia

Paul is ranked on...

Paul is also found on...