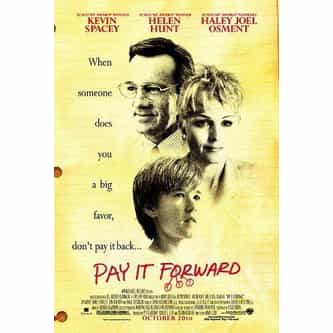 Tagline
Like some other kids
12-year-old Trevor McKinney believed in the goodness of human nature. Like many other kids
he was determined to change the world for the better. Unlike most other kids
he succeeded.

Pay It Forward is a 2000 American drama film based on the novel of the same name by Catherine Ryan Hyde. It was directed by Mimi Leder and written by Leslie Dixon. It stars Haley Joel Osment as a boy who launches a good-will movement, Helen Hunt as his single mother, and Kevin Spacey as his social-studies teacher. ... more on Wikipedia

Pay It Forward IS LISTED ON