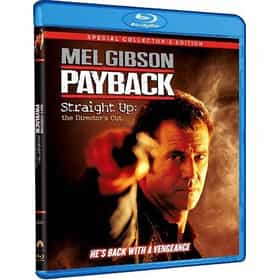 Payback is a 1999 American action film directed by Brian Helgeland and starring Mel Gibson, Gregg Henry, Maria Bello and David Paymer. It was based on the novel The Hunter by Donald E. Westlake using the pseudonym Richard Stark, which had earlier been adapted into the 1967 film noir-classic Point Blank, directed by John Boorman and starring Lee Marvin. The film was Helgeland's directorial debut after a career as a screenwriter. Helgeland in 2006 issued a director's cut that differs substantially from the version released by the studio. ... more on Wikipedia

Payback is ranked on...

Payback is also found on...